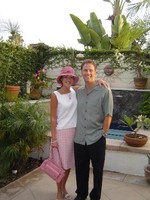 Tara Kimberly Sims (maiden Praeger) was born on July 14th, 1973 to Geoff Praeger and Pamela Tajima Praeger.  She found peace from two different attacks of medulloblastoma when she died on May 18, 2006 with her husband, father and mother and other family members by her side.

She became proficient in Japanese and her first position was with a Japanese electronics firm.  Her success there led to a position with Arrow Electronic in Seattle.  There she also met Scott, who would later become her husband and faithful caregiver and cheerleader.  Her skills and management potential moved her up the corporate ladder and after convincing Scott of the value of sun, she transferred to Arrow San Diego and he also moved to start their lives close to the Pacific Ocean.  Through Arrow, she was afforded great corporate experiences and was granted a sabbatical in July 2005, which she regretfully never able to take because of her cancer recurrence.

Tara suffered her first surgery and recovery in 2002.  That same spring she and Scott were married.  They worked hard and were the epitome of a loving and caring couple living under the threat of a cancer recurrence but building their life in Carlsbad, becoming successful in their careers, supporting family and friends and traveling the world.  In July 2005 medulloblastoma was again discovered and Tara endured another craniotomy and aggressive chemotherapy and stem cell treatment.

All during that time, she exerted great courage and optimism, buoying her family and friend through inspiring posting and photos on her TaraTheSurvivor website at www.carepages.com.  She eased the pain of others through her words and actions.

Her supportive family, friends, neighbors, and colleagues will miss her beauty and vivacious, intelligent and humorous personality.  She was a loyal friend and peacemaker.

She is survived by her husband Scott of Carlsbad; mother Pam of Spokane; father Geoff and his wife Cynthia Lambarth of Spokane; grandfather Ted Tajima of Altadena, CA; father and mother-in-law Dr. Arnold and Sherry Sims, Bellevue, WA, and many in-laws, cousins, aunts and uncles, stepsister and stepbrother, and her beloved Golden Retrievers Wilson and Riley.  Tara also had a special sisterly bond with her Cuzzy, Aimee of NYC.

Services celebrating Tara’s life were held at noon on June 3rd, 2006 at Solana Beach Presbyterian Church in California and at 2:30 pm on June 6th, 2006 at Mukogawa Fort Wright Institute in Spokane, Washington.

The family expressed it’s deepest gratitude for all of the love and support given Tara and her family.  Donations were asked to be made to City of Hope 1500 E Duarte Rd., Duarte, CA 91010 or San Diego Hospice Foundation, 4311 Third Ave., San Diego, CA 92103 or a Hospice in your own community.